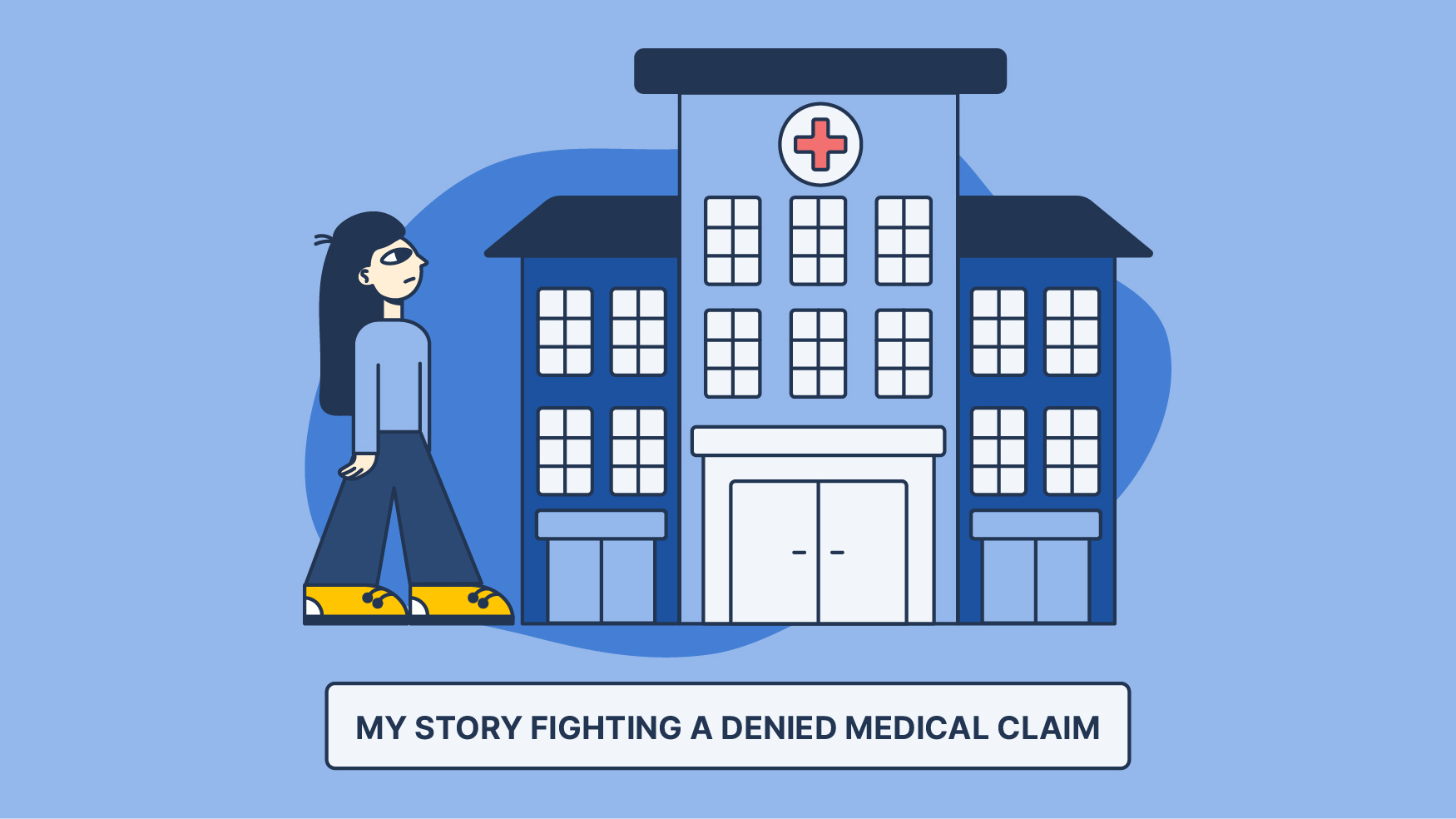 Not only can a denied health insurance claim be stressful because of the financial pressure it poses, but also because navigating the denial and appeal process is instantly overwhelming and drains your time and energy. Such was the case for Z, a young woman whose true story is shared here.

In 2020, I received a medical denial from my health insurance because I had seen an out-of-network provider. The bill totaled over $2000, a make-or-break sum for me at that point!

I have cystic fibrosis, or CF, a genetic disorder that leads to serious and often fatal respiratory issues. Just months before receiving this medical claim denial, I had moved to a rural area in a new state and purchased an Anthem Blue Cross Blue Shield insurance plan from the Affordable Care Act marketplace.

In my new area, this was the only provider available to me at that time. I chose the highest tier Anthem plan available, confident that it would cover my necessary treatments and cystic fibrosis care. In my state, however, there was only one cystic fibrosis specialty center – a 7-hour drive away from my home.

During the summer of 2020, I decided it was time to see the cystic fibrosis specialist in my new state, so I made an appointment. Before I called the CF center, I checked my insurance’s list of in-network providers. Although I didn’t see the CF doctor’s name on the list, I assumed that was because the provider was far away. The rest of the providers on the list were all local. I called and checked that the CF center accepted Anthem and thought I was all set, especially since this specialist was the only one in the state qualified to treat my complex disease!

So I visited the CF specialist for a routine checkup, did breathing tests, blood draws, and various other exams like I’d done my entire life. Cystic fibrosis care often includes seeing a bunch of different doctors, since the disease doesn’t only impact my lungs, but also my GI tract, sinuses, pancreas, and more.

One month after this appointment, I opened the letter that started my worst nightmare. It was a medical claim denial from Anthem. I wondered why my insurance would deny my claim, and saw that their explanation was that the CF doctor was out of my network and therefore the visit wasn’t covered. At first, I thought this would be an easy issue to clear up, so I phoned my insurance.

I should have taken this first phone call as a sign that my insurance provider wouldn’t give in easily. That morning I spent over an hour on the phone with Anthem as customer service agents struggled to understand my issue and transferred me from one representative to another. Finally, I was able to speak to someone who offered to help me file an appeal.

The first appeal was simple, it required only an official request over the phone. A month later, though, I received a second denial letter, saying that Anthem had come to the same conclusion about the denied health insurance claim as the first time. Looking at the amount I owed the doctor, I’m pretty sure my heart skipped a beat or two. So I called my insurance provider again, and was kept on hold and transferred until I could speak to a denied claim representative who escalated the issue for a second appeal. This time, the agent told me that Anthem would require a letter from my doctor in order to have any chance at a successful appeal.

Somehow I found time in the middle of my busy work schedule to make my way through the phone tree at my doctor’s office to request a letter explaining why it was absolutely crucial for me to see a CF specialist and not simply a pulmonologist (lung doctor). Since I’d been seen at cystic fibrosis clinics for as long as I could remember, I knew that my disease required a provider who was trained to deal with CF specifically, since the illness and its treatments go beyond the scope of a normal pulmonologist’s care.

Facing a wrongfully denied Out of network medical claim? Reach out today to learn how aJust can help!

After getting all the documents together and submitting a second appeal, many weeks passed before I received a second health insurance claim denial. This time, the letter came with a list of in-network pulmonologists that Anthem told me to see instead of a CF doctor. Now I was really stressed. Not only did I realize I couldn’t stop the fight there because of my financial situation, but I also knew that not being able to see a CF doctor would impact my health.

I was on a specialty medication that the local pulmonologist knew nothing about, and had come down with a sinus infection that required surgery and antibiotic intervention before it could spread to my lungs. If there were ever a time I needed to feel secure in my ability to see the right doctor, it was then.

For the next month, I spent most of my mornings before work doing research on how best to fight this health insurance denial. I reached out to lawyers in my area, but once I discovered that their hourly fees and consultation rates would already add up to far more than my claim was worth, I decided not to hire a health insurance denial attorney.

After many days spent desperately trying to figure out what my options were, I came across a website for my state government that allowed me to file an official complaint against Anthem. So I filled out an online form and included the insurance documentation, the doctor’s letter, and my own views on why the medical claim should be covered along with a description of the extreme distress the situation had caused me for more than six months. At that point, my health was deteriorating. Plus, I was worried that the hospital where I received care would send bill collectors after me if I did not find a way to cover the costs of my treatment before the year’s end.

After more than a month of waiting for a response from the state, I received an official letter announcing that the state had sided with me and would compel Anthem to cover my denied medical claim and any future visits. Just a week later, I opened a letter from Anthem congratulating me on the new addition to my network, as if they had come to the decision on their own. At this point, it was already the last days of the year and my health insurance plan was due to expire. I learned I’d have to go through the same process again with Anthem the next year, so I switched insurance companies.

In this particular case, it took six months of fighting, hours on the phone, dozens of conflicting messages from various customer service agents, plenty of independent research, and one escalated review until I was able to get my health insurance claim covered. Since I tackled this all on my own, I felt overwhelmed, confused, and frustrated throughout the entire process. I just don’t think I can go through that again.

If Only Z Had Reached Out to aJust

Z’s situation, as ridiculous as it may seem, is not uncommon. Her insurance provider tried everything it could to weasel out of covering a necessary medical visit. In this case, Z took the fight into her own hands, and dedicated days of her time to seeing the process through. This meant stepping out of work to take phone calls from the insurance company, tracking down paperwork, and researching possible action that could be taken.

If Z had reached out to aJust, none of that would have been necessary. Well, not on her part anyway! That’s because aJust takes over after a medical claim is denied and does the fighting for you. What might Z have done with the extra time and peace of mind that would have accompanied getting some help fighting her medical claim denials? Unfortunately, no one will ever know.

Are you in a similar situation and believe your insurance has wrongfully denied a claim? There is no need to spend hours on the phone, sift through paperwork, or shell out for a lawyer when aJust is on your side!

Start by filling out this two-minute form to discover how aJust can help you fight your insurance provider and get coverage.

What is the size of your denied claim or medical bill?

According to the Consumer Finance Credit Bureau, $88 billion dollars in medical debt are currently

What Happens if You’re Too Sick to Fight a Medical Bill?

Fighting medical bills takes an emotional and physical toll, even leading some patients to further

In the past years, multiple lawsuits have been brought against major health insurance companies for